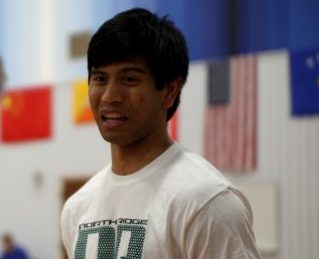 What Coach Miller Says About Andrew Ocampo:
“As one of our former students, Andrew is the perfect fit to carry on the NRBA’s tradition of excellence. I loved coaching Andrew, and I am confident that this young man will have a profound impact on our students and their families. His example of character and integrity is what we hope all our students will embrace.”

Coach Andrew Ocampo’s Bio:
Andrew Ocampo currently serves as a Player Development Instructor at the NRBA focusing on 1-1, small group and camp instruction. In addition, Andrew also serves as an instructor in the Explode Performance Program. Andrew first came to the NRBA as a student before his senior year of high school. After playing high school basketball at Broughton High School and Neuse Christian Academy, he decided to further his education at the University of North Carolina at Chapel Hill.

As a freshman, Andrew made the UNC Junior Varsity Team, a tradition that originated from the time where college basketball did not allow freshmen to play varsity, allowing them instead to develop their skills on a freshmen team. Now rarely found at the Division I level, this is a tradition which was kept within the UNC program by the late Coach Dean Smith. Coach Roy Williams continued the program as an opportunity for students to play at the next level, and as a means of developing players who wish to walk-on the varsity team.

After playing two years on the UNC Junior Varsity Team under Coach CB McGrath and Coach Hubert Davis (now UNC’s head basketball coach), Andrew was given the unprecedented opportunity to serve as a Junior Varsity Assistant Coach. In this position his last two years of college, inside one of the nation’s most historic and prestigious basketball programs, Andrew began to see the game in a new way, from a coaching rather than a player’s perspective.

More importantly, during his college career Andrew learned what it meant to truly walk with Christ. Although growing up in a Christian household, in college he took hold of his faith as his own through a ministry known as Campus Outreach. This student led ministry focused on reaching their peers who did not believe in the Gospel in hopes of having the opportunity to share their faith by doing life-on-life ministry. Through the friendships built and opportunities given in Campus Outreach, Andrew was discipled in his walk with God and learned how to disciple others as well.

After graduating from UNC in May 2016, Andrew returned to the NRBA to work summer camps as a coach and eventually decided to accept Coach Miller’s offer to come on staff.  Andrew has become a integral part of the NRBA teaching staff, and loves giving back to a program and ministry that invested in his future.  Andrew and his wife Megan reside in Raleigh, NC along with their daughter Sophia Rose, born June 20, 2022.