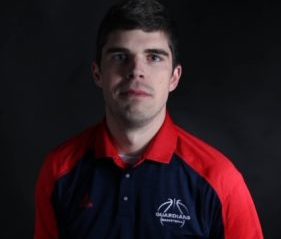 What Coach Miller Says About James Lynch:
“James and his wife Kim recently (July 2014) left for South Korea to follow God’s call on their lives as missionaries and church planters. James will always be an invaluable member of our team, and I am incredibly proud of his commitment to building God’s Kingdom in Southeast Asia. In many ways, I feel like the NRBA is alive and well in Seoul.”

Coach James Lynch’s Bio:
James Lynch served as a Player Development Instructor at the NRBA focusing on 1-1, small group and camp instruction. He is a 2008 and 2010 graduate of Liberty University holding a bachelor’s degree in Biblical Studies and a Masters degree in Global Apologetics. James is currently pursuing his Ph.D. in Theology and Apologetics and hopes to complete his dissertation in the next few years. Throughout his secondary education, James has also worked as a Graduate Teaching Assistant which has enabled him to have classroom teaching experience as well as one-on-one interaction with students.

In addition to pursuing his education, James served as a leadership member at LifeCity Church in Raleigh which launched in 2012 and has a vision to see people become fully devoted followers of Jesus Christ. At LifeCity, he served as the Sunday Experience and Connections Director which allowed him to interact with all of the volunteers and guests that walk through the doors of the church. While serving in church ministry and teaching others the truth of God’s Word is James’ calling in life, he has always had a passion for the game of basketball and has been involved in the game since a very young age. Playing the game of basketball from the age of 5 through high school had a significant impact on his development as a player. The NRBA’s dedication to not only player development but spiritual development was what brought James on board.

Growing up near Syracuse, NY, James is the youngest of five children. In July of 2009, he married his wife Kimberly who is currently a history teacher at the International School in Seoul, South Korea.