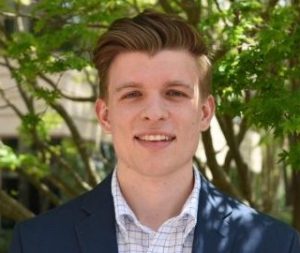 What Coach Miller Says About Luke Miller:
“Luke is a talented and gifted young teacher who has the ability to communicate and relate to NRBA students in a powerful way. Luke has spent most of his life on the court in instructional settings, and has always competed against older players. The maturity gained from that experience gives him an edge as a player and instructor. He has a gift and a heart for sport’s evangelism, and will continue to be an important asset to the future of this ministry.”

Coach Luke Miller’s Bio:
Luke has grown up around the game of basketball and sport’s ministry. Luke is known for his passion and dedication to the game, but more importantly, to his Savior. It is that passion that makes him a natural fit at the NRBA. Luke currently serves as the NRBA’s Social Media Specialist.

Luke was a member of the Varsity Basketball Team at North Raleigh Christian Academy since his freshmen year. In the 2007-08 and 2008-09 seasons, Luke had the opportunity to play with his older brother Nathan. Together they formed a solid backcourt for the Knights. During the 2009-2010 season, Luke not only took over an increased scoring role (12 pts. /game), but as team Captain, he also stepped up as a leader on and off the floor. As a senior, Luke was instrumental in leading his team, again as Captain, to a school record 18 wins and a second consecutive trip to the state tournament. He averaged 15 points, and 3 assists/game while shooting almost 45% from behind the 3 point arc for the season. Luke was also honored as the 2011 Coach’s Award recipient for the Knights with the coaches citing his work ethic, leadership and mentorship as key factors in the team’s success. He is respected as an unselfish player, a fundamentally sound competitor, an excellent decision maker and an outstanding shooter. Luke was also a high school honor student carrying a 4.0 GPA.

It has been Luke’s goal his entire life to play basketball at the college level. He has worked very hard to make this dream become a reality. In April 2011, Luke signed a letter of intent to continue his athletic and academic career at Emmanuel College. Emmanuel is located in Franklin Springs, GA and is a member of the NCAA Division II Conference Carolina’s, and formerly a member of the highly competitive NAIA Division I Southern States Athletic Conference (SSAC). As a freshmen starter for the Lions, Luke played a significant role in the team’s success and eventual advancement to the NCCAA Championship Game at Grace College in Winona Lake, IN. Luke’s achievements as an outstanding team player, defender, perimeter scorer (3rd leading scorer for the Lions), and accurate long range shooter were recognized by opposing coaches as he was named to the SSAC All-Freshmen Team. Luke was also recognized for his work in the classroom being named to the Dean’s List both semesters.

Luke picked up where he left off as a freshmen, by helping lead EC to one of its finest seasons in school history (28-5 overall record) including an invitation to the NAIA National Tournament in Kansas City, and the school’s first top 10 national ranking. Luke’s scoring (12 ppg) and shooting accuracy (87% FT) have made him a respected offensive threat in the SSAC. A highlight during the season was Luke’s winning 3 pt. shot against #2 ranked Lee University. Luke was again rewarded for his academic excellence being named to EC’s Dean’s List and being honored as an NAIA/SSAC Academic All-American.

Luke’s junior season was memorable indeed. As a captain, Luke led his team to the NAIA National Final in Kansas City, eventually losing to Vanguard University (70-65) in the championship game; a game broadcast on ESPN 3. The Lions finished 33-4, and Luke’s consistency as a player, both offensively and defensively, earned him a spot on the SSAC East All-Divisional Team. During the season, Luke also earned SSAC Player of the Week honors with back to back 25 point games vs. Coastal Georgia and Southern Poly. In the Southern Poly game, Luke was a scorching 7-9 from 3 pt. range. In conference tournament play, Luke achieved a milestone at EC by joining the career 1000 point club. As a senior, Luke will be playing in the very competitive NCAA Div. II Conference Carolina’s. Luke’s accuracy as a 3-pt and FT shooter should place him among the NCAA leaders nationally in both categories. Luke also continued his excellence in the classroom being named an NAIA Academic All-American. Luke was one of only 75 student-athletes nationally to receive this recognition. He was also named to the SSAC All-Academic Team and to the Emmanuel College Dean’s List both semesters.

Luke’s senior season was again marked with great success on and off the court. Luke was named to the NCAA Conference Carolina’s Presidential Honor Roll, and in just the first year of participation in Conference Carolina’s, Luke would help lead EC to a third place regular season finish (due to NCAA rules, EC was not eligible for post-season conference tournament play). Luke is a member of a senior class that led EC to over 100 wins during their career, a winning percentage of 75%. Luke would also finish his career with over 1300 points scored, over 300 3-pt FG’s made, fewer than 1 turnover/game, and with a career FT percentage of over 82%. His final season was also marked by helping lead EC to the NCCAA South Region Championship, and a trip to the NCCAA Elite Eight held in Winona Lake, IN. The Lions would finish third in the nation by defeating Lee University in Luke’s final collegiate game. During his last tournament run, Luke would average almost 15 points/game, shooting a blistering 16-34 (47%) from behind the arc and 100% from the FT line.

“We are so proud of Luke and wish him every success as he pursues his professional goals. Luke continues to be an example to all our students of how hard work prepares you for success in every area of life.” Coach Miller  Luke and his wife Lauren make their home in Atlanta, GA.