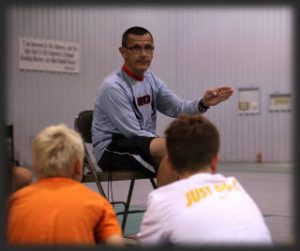 Coach Mark Miller is actively involved in ensuring that all training sessions for each NRBA student are organized and conducted with excellence . Coach Miller relies upon staff members to assist him who are trained and qualified to teach, challenge, motivate and encourage students to reach their full potential.

Coach Miller is the Founder and Director of North Ridge Basketball Academy. Coach Miller is highly respected as a clinician, camp director and motivational speaker. His knowledge of the game of basketball and his ability to teach the fundamentals are tremendous strengths. Throughout Coach Miller’s career, many of his former players/students have gone on to sign college scholarships and to play professionally, but his main focus has always remained the same: to use the game of basketball as a training ground in helping young people develop the skills necessary, on and off the court, to be successful in life.

Coach Miller began his coaching career as the Junior Varsity Coach at Wheeler High School in Marietta, GA, a large 4A public school in metro Atlanta. After posting an impressive two-year JV record of 25-7, Coach Miller, at age 24, was elevated to the Head Varsity position. He would go on to direct the Wheeler Program for the next seven years. During his last four seasons, Miller’s teams posted an outstanding 74-30 overall record. His 1991 team advanced to the quarterfinals of the Georgia Class 4A State Championships.

After Wheeler, Coach Miller entered the collegiate ranks with stops as an Assistant Coach at Tennessee Temple University in Chattanooga, TN and Liberty University in Lynchburg, VA. In 1992, TN Temple University captured the NCCAA District 2 Championship. In 1993, with Miller joining the staff, Liberty’s recruiting class was ranked #1 in the Big South Conference by Bob Gibbons of the All-Star Sports Report. In 1994, Liberty won the Big South Conference Championship earning an automatic bid to the NCAA Tournament. In the East Regional, Liberty faced #1 seed North Carolina and legendary coach Dean Smith.

Following Liberty, Coach Miller decided to return to the high school ranks to spend more time with his family. In 1995, he took over the reins of the basketball program at Ravenscroft School in Raleigh, NC. Ravenscroft had suffered through 14 consecutive losing seasons prior to Miller’s arrival. Under Miller’s leadership, Ravenscroft won back-to-back TISAC Championships and was a 4-time state independent playoff qualifier and 3-time playoff quarterfinalist.

Beginning in 1997, while at Ravenscroft, Coach Miller helped establish and began directing Hoop Heaven Basketball Camp which would become a very successful summer camping and urban outreach program, based in New York City. Coach Miller guided and directed the growing Hoop Heaven program on a full-time basis from 2000-2004. He also began traveling overseas conducting basketball camps and clinics, which he has continued over the years, and has included trips to the Philippines, Bhutan, Kosovo, Mongolia, Sweden, Malaysia, North Korea, South Korea, Thailand, China and Indonesia.

In 2004, Coach Miller founded MINA Ministries, and began to invest his time in the personal development of men and women as a personnel consultant and life coach. With the opening of the North Ridge Basketball Academy in 2009, Coach Miller returns his focus to the game of basketball and to his vision of providing a program where first class basketball instruction is combined with personal character development so that young people can truly reach their full potential. Coach Miller is a member of the National Association of Basketball Coaches (NABC) and is a lifetime member of the Cambridge Who’s Who Registry of Executives, Professionals and Entrepreneurs. He has been married to Tamra for 42 years, is the father of three grown sons, Dustin, Nathan and Luke, father-in-law to Catherine, Lauren, and Madison and grandfather to a beautiful little girl named Sarah, and a wonderful little boy named Elisha.