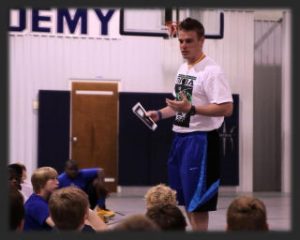 What Coach Miller Says About Nathan Miller:
“Nathan Miller is an exceptional teacher of the game, and a student favorite at the NRBA. Having grown up around coaches and in basketball instructional environments, he is able to communicate to players those skills and habits that lead to success. His work ethic is unparalleled, and that drive, energy and excitement are contagious elements of his teaching. He is also a young man committed to his faith, and to challenging others to reach their full potential. It is a unique privilege to partner with my son in impacting young people in a positive way.”

Coach Nathan Miller’s Bio:
Nathan Miller currently serves as the NRBA’s Director of Explode Performance. Nathan is a 2009 graduate of North Raleigh Christian Academy. As a senior, Nathan was one of the leading scorers in North Carolina averaging 26.2 points, 5 assists, and 3 steals per game. He was also a 3-time All-Conference selection and 3-time North Raleigh Christian Academy MVP. He is currently NRCA’s all-time leading scorer finishing his high school career with over 1,300 points, 350 assists, and 250 steals. Nathan also graduated with a 4.0 GPA and garnered many academic awards as well.

In April 2009, Nathan signed a letter of intent to continue his athletic and academic career at Southern Wesleyan University. SWU is located in Central, SC and is a member of the NCAA Division II Conference Carolina’s, and formerly a member of the highly competitive NAIA Division I Southern States Athletic Conference (SSAC). Nathan’s college coach, Coach Wimphrie, summed up his abilities in this statement: “Nate is a prolific scorer with deep range and accuracy. He has excellent ball-handling skills along with great court vision and passing ability. I anticipate Nate competing for a starting position as a freshman. My goal is to find more student athletes like Nate Miller who embraces our mission here at Southern Wesleyan University.”

As a freshman, Nathan was named to the Southern States Athletic Conference (SSAC) All-Freshmen Team and was the starting point guard on a much improved SWU team. Nathan led his team in assists, and was one of the finest 3 point shooters in the SSAC and the NAIA at over 43%. Nathan was also named to the Dean’s List his first two semesters at SWU. As a sophomore, Nathan was named a Captain and his leadership on and off the court were instrumental in SWU’s return to winning success. He again led SWU in assists and continued his reputation as an accurate shooter and scoring threat. He was also the team’s recipient of the prestigious NAIA Champion of Character Award, and was named an NAIA/SSAC Academic All-American. As a junior, Nate’s season was cut short due to a season ending knee injury. At the time of his injury, the Warriors were 7-2 and heading toward one of the most successful seasons in recent SWU history. Nate’s leadership, shooting accuracy, and 14 point scoring average were critical to the team’s success. With Nate sidelined, the Warriors struggled to find a winning chemistry and ended with only 9 wins for the season. Nate continued his commitment to excellence in the classroom and was again named an NAIA/SSAC Academic All-American. Following surgery and a lengthy rehabilitation process, Nate worked hard in preparation for his senior season. A serious ankle injury, however; would again sideline Nate for over 6 weeks during his final collegiate season. Far from being 100%, Nate returned to the court to lead SWU to a birth in the NCCAA Tournament and to the NCCAA South Region Championship Game. Nate was also honored as one of 60 student-athletes nationally who were honored as NAIA Academic All-Americans and was inducted into the prestigious Alpha Chi Academic Fraternity.

Nate joined the NRBA Staff full time in August 2013 and is responsible for designing and directing the fast growing and popular NRBA Explode Performance Program. Nate is highly qualified to lead the Explode Program with both CSCS (Certified Strength and Conditioning Specialist) and ISSA (International Sport’s Science Association) certifications. “We are so proud of Nate. He is a warrior in every respect. He is an example to all our students of a young man committed to excellence on the court, in the classroom and as a follower of Jesus Christ.” Coach Miller

Nathan honed his skills growing up a coach’s son, spending his summers participating in camps across the country, and at Hoop Heaven Camp in New York, competing against outstanding athletes and players. From that experience, he developed an incredible fundamental foundation in the game, an unparalleled work ethic, and a passionate competitive spirit that continues to drive him toward success. In addition, Nathan’s ability to teach and communicate the game at a high level has become a tremendous strength that others are taking note of.  Nathan is engaged to Madison Wolfe and the two are planning a September 2020 wedding.