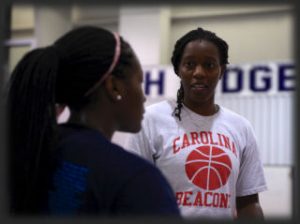 What Coach Miller Says About Raina Smith:
“The NRBA is so fortunate to have Raina as part of our staff. I was impressed with her commitment to excellence from the moment I met her. She recognizes the enormous responsibility that working with young people brings, and as a result, provides an incredible positive example for all our students to follow. Raina is a gifted communicator and teacher; her knowledge of the game and her enthusiasm teaching it are a tremendous asset to this ministry.”

Coach Raina Smith’s Bio:
Raina Smith currently serves as a Player Development Instructor at the NRBA focusing on 1-1, small group and camp instruction. Raina is from Raleigh, NC where, as a high school student/athlete, she attended and graduated from Ravenscroft School. While at Ravenscroft, she was a two-sport standout. As a softball player, Raina led her team to the 2004 NCISAA State Championship while garnering All-Conference and All-State honors. In addition, she was named the News and Observer’s ‘Home Run Queen.’ As a basketball player, Raina was part of the tradition rich Ravenscroft program where she started as a senior averaging nine points, twelve rebounds and 6.3 assists per game. Her performance on the court earned her the school’s Most Improved Player Award.

Raina began her collegiate career at Hawaii Pacific University where she was named to the Dean’s List with a 3.5 GPA. Following her freshmen year, Raina transferred to NCAA Div. II Barry University in Miami Shores, FL and immediately found a home with the Lady Buccaneers. She was an integral part of the 2008-09 Barry basketball team that achieved the highest NCAA national ranking (13th in the USA Today/ESPN Coaches’ Poll) in school’s history. Raina was an honor roll student at Barry, and also the team’s representative on the Student Athlete Advisory Committee (SAAC). While at Barry, Raina played for veteran coach Bill Sullivan who summed up her contributions and character in the following statement, “Regardless of the situation, Raina maintained an even-temperament and was filled with optimism and encouragement for her teammates. Raina is a leader on and off the court, is extremely unselfish, and always placed the team above her own desires. Raina has a tremendous work ethic and was one of our hardest workers. Each season she would spend extra hours in the gym trying to improve her game.”

In addition to her academic and athletic achievements, Raina has always been actively involved in her community and has an incredible desire to help meet the needs of others. She has been involved in several community service projects such as teaching basketball skills to inner city boys and girls at the Miami Rescue Mission; helping raise money to buy and deliver gifts to underprivileged kids during Christmas vacation; and helping build houses with Habitat for Humanity. She also served as a camp counselor for the City of Raleigh Department of Parks and Recreation for many years.

Raina continues to pursue her dream of playing professionally, and is also committed to continuing her education at the Master’s level. She currently resides in Raleigh, NC.