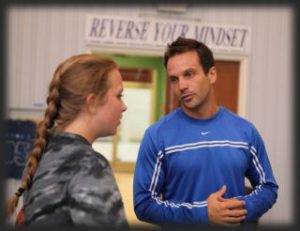 What Coach Miller Says About Seth Huber:
“Seth Huber is an outstanding educator. His passion, expertise, and ability to communicate the game of basketball at every level are a rare combination. I have partnered in sport’s ministry with him for years, and consider his talents and abilities to be second to none. He is a man of extreme integrity who will challenge and motivate our students toward excellence. The NRBA is truly blessed to have his leadership.”

Coach Huber’s Bio:
Seth Huber currently serves as Co-Director of the NRBA focusing on staff development and curriculum implementation. Coach Huber is a Liberty University graduate where he earned a Bachelor of Science degree in physical education. He is a licensed physical educator for grades Pre-K through 12th, and was a public school instructor for over a decade. During that tenure, he developed a physical education program emphasizing individual skill acquisition, progression, and refinement through explanation, demonstration, and repetition.

Coach Huber has been extensively involved in the game of basketball as a player and a coach domestically and internationally. He’s developed into an exceptional motivator, teacher, and communicator in regards to coaching.

Coach Huber has had experience coaching various levels of basketball in multiple settings. He was a high school boy’s basketball coach at a private school in Lynchburg, Virginia, where he compiled a winning record. He has also taught the game of basketball domestically and internationally through clinics and camps coordinating fundamental skill teaching stations. He worked as a skills coach, team coach, and league commissioner for multiple summers at Hoop Heaven Camp in New York. In addition, he has coached in various youth leagues throughout his career.

Coach Huber is also an exceptional player, and has competed in the United States, Guatemala, El Salvador, China, Indonesia, Thailand, and the Philippines as a member of travel teams for Athletes in Action, Hoop Heaven and the International Basketball Training Academy.

Coach Huber is an innate educator and coach who continues to pursue and explore opportunities to advance his abilities and experiences. He currently resides in Wake Forest, NC. with his wife Jessica and three children, Elle, Titus and Jackson.